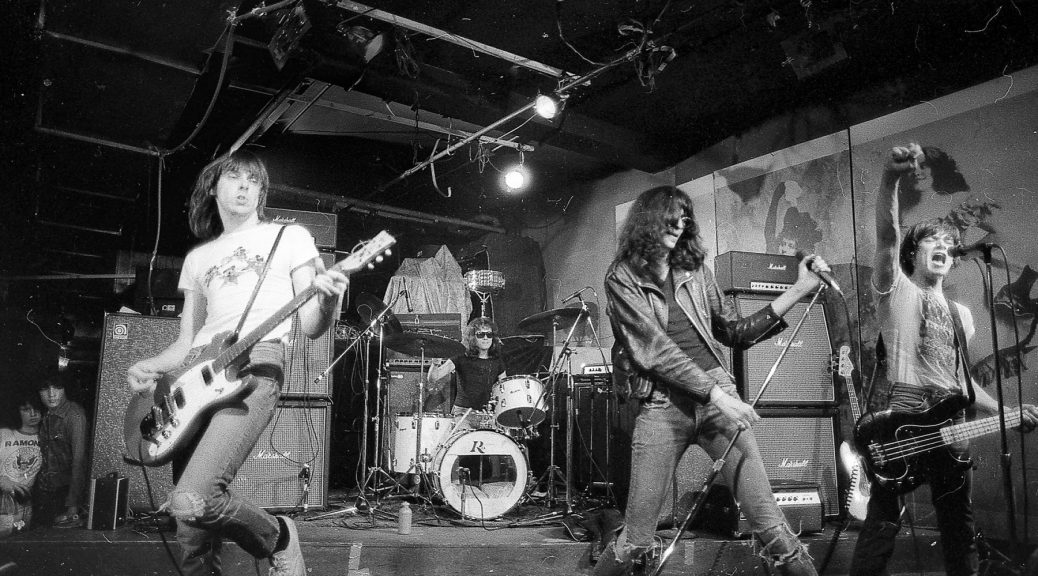 My fiancée purchased me a Ramones T Shirt for my birthday at the end of March. I’ve never been a huge Ramones fan, but I fell in love with the shirts design (the bands classic logo in a multi colour haze) with tour dates from an American leg back in the late 70’s reprinted lovingly on the back. Excusing the fact the shirt was actually in my size, and within the UK for accessible shipping, it just made sense for me to pick this up. Even if the most Ramones music I’ve listened too is Metallica covering ’53rd and 3rd’ and the B Side’s to the St Anger single in 2003.

But my crimes against music, namely wearing a T Shirt to “support” a band I’ve never really listened too before aside, what happened after she purchased my gift has been far more interesting.

My birthday fell on March 30th, not long after the Government put in place measures to restrict the potential spread of Covid-19 within the UK. Non essential shops, workplaces were closed and my own workplace migrated from an office environment to working at home from my spare room. Suddenly I found my routine changed in an incredible way; there were no weekend trips to the record store, no working from the office and no charity store browsing. By the time the shirt had arrived, although it didn’t take long, I was already working from home and decided to leave the item within it’s plastic packaging; in a dresser drawer.

In the first days of the lockdown, Lord Wolfson (the owner of high street clothing chain NEXT) was quoted on BBC News as having said that “People do not buy a new outfit to stay at home” when speaking about this own companies significant losses in the wake of the (then new) restrictions. In reality, my shirt remained in that dresser drawer, since working from home meant I had neither nowhere to go to wear it nor reason to put it on. To help myself as much as possible, and protect our family against the spread of this deadly virus, our weekly shopping is delivered to our home, pharmacy prescriptions are collected by post, our online shopping for non essential items has also decreased. As such, unless it was for our daily Government exercise, nobody was leaving or entering the house.

To help ourselves even further, although I admit probably partially unnecessarily, we also routinely changed our clothes when returning from daily walks and exercise; so normally aimed not to wear the newest T Shirts understanding that these garments would probably get covered in sweat. As such, I can certainly empathise with Lord Wolfson, as there was absolutely no emphasis whatsoever for me to wear my new T Shirt – I mean, what would be the point?

My father used to say I was a slave to fashion. He’d still tell me this now, but I haven’t lived with him since 2008; and given that his main concern throughout this national crisis has been getting a haircut once it’s all over, I can certainly see where I get it from. Granted, as I have mentioned previously, I only purchased the shirt based on the design and the theme and not due to the specific artist. But I still bought it because I thought it looked good, and in line with the reason everyone purchases clothes (beyond practical no nonsense purchases like work outfits) I bought it because I wanted other people to see me in it.

I’m vain enough to admit that I buy clothes that my intention is to spark interest in. A shirt with a logo or design from a popular TV series, for example, is no doubt bound to create conversation with a random stranger – and has, on occasion (to the ultimate annoyance of my fiancee) been the reason why I’ve been stood at a bus stop chatting to random for 15 minutes. It only happens to me, I’ve one of those faces; apparently.

Others must have thought of this too, I wasn’t the only one, as social media platform Tik Tok began encouraging people – or they began encouraging each other, I’m still not sure how that starts – to take out the bin in style. Women got glamoured up in evening wear, children dressed as superheroes and others even wore nothing but tin foil in order to take out the bin – ultimately, the one big event of the week whilst the world was under lock down. If you’re reading this article about 30 years in the future, I’m curious as to what you actually think of all this, and whether my career as a writer managed to flourish in the way I’d hoped.

Ultimately, without routine, we all start to go a little crazy – and that’s obvious from the devolution of the office, where a lot of employers now say that even when restrictions are lifted they’d rather invest money in employees over real estate; with many seeing this as an end to chats by the water cooler and trips to the copier.

But if office culture is removed entirely, this also removes the chance to socialise, to mix with colleagues and form long lasting relationships. Much like School or University, offices create a natural place for either single one night encounters too marriage; as well as sports teams, quiz nights and decade long friendships. On the other hand the office can also create some pretty hateful relationships, with vicious bullying, rumours and awkward politics – and maybe those people would prefer to stay at home, so long as they’ve got their own social network already established; otherwise they’re going to live a lonely life of solitude.

Our entire sitcom culture is based on the idea of office politics, everything from ‘Scrubs’ to ‘Friends’ and – of course, even ‘The Office’ is routed in the idea of shared experience in triumph, success, disappointment and grief. Few successful comedies have ever been based on the idea of solitude and separation. Even ‘Porridge’ let them out of their cells.

Ultimately, by removing the workplace from a number of people’s lives, I suspect many will have even less inclination to do the work they should have been doing in the first place. Since the boss can’t see you working hard, there’s no chance at promotion or brown nosing, so what’s the point – why not make less of an effort? Since you can’t be seen to be at work, do certain social norms and workplace etiquette still exist. Should you even worry as much about breaking the rules, when it’s unlikely discipline action can be enforced. In one case I know someone facing redundancy, but only once furlough ends, in a sort of strange Schrodinger’s cat situation where they both have a job, but also don’t.

And as well as an informal suspension on firing policies, there’s also a sort of informal freeze on hiring policies, unlikely to be rescinded or disappear completely until much later on after the lock down is completely ended. So any possibility of future career advancement or job changing (that ‘shooting for the moon’) might be something you really will need to work much much much harder at obtaining.

In the future, I wonder if I’ll even have a chance to wear that T Shirt? Surely I will, in the street, or in the shops; maybe a stranger will even comment on it and I’ll feel somewhat elated by the compliment. Perhaps I’ll just attempt to take the bins out, and post a picture of me doing so on Instagram, with the hashtag #HeyHoLetsGo – who knows what might happen.

But I do know, that during this lock down, I have actually started listening to the Ramones; feeling I now know them a little better then when I first saw this shirt.