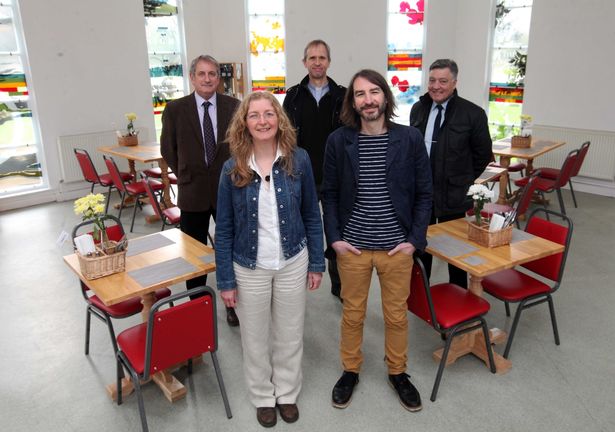 A new stained glass window display in Sunderland has brought a vital piece of history back to the banks of the Wear River. Monasteries in both Monkwearmouth and Jarrow are credited as having brought stained glass to England in 674AD, with a new instillation now unveiled some 1,300 years later at Bede’s Bakehouse cafe, St Peter’s.

The Bakehouse Café is so called because Saint Bede, an English monk from the monastery at St Peter who has been called “The Father of English History”, wrote of a similarly named “bakehouse” on the site. Volunteers at the café attempt to emulate the welcoming and positive hospitality Bede experienced to this day.

The display, created by artists Rachel Welford and Adrian Riley, was inspired by ‘The Reckoning of Time’ – arguably Bede’s greatest scientific achievement. Written in 725AD the book calculated a 1253 year cynical calendar, a forerunner to the western calendar we still use today.

Artist Rachel Welford explained that Bede’s observations of day and night were crucially important in the design of the work, saying: “Just as Bede observed the changes from day to night, the windows change with the light, revealing variations in pattern, shadow, reflection and colour at different times of the day and year and in varying weather conditions” and that “Unlike most traditional stained glass they are also intended to be viewed from the exterior of the building as well as inside.”

Rachel says further that “We wanted to make a work that didn’t just illustrate facts, or is a representation of an event; rather it is an example of that event itself. It embodied those concepts rather than just showing a picture”

The stained glass was created at the National Glass Centre in Sunderland. A representative of the centre spoke to Sunderland One about the process of creating such a display saying: “this process would be what’s known as a muff method for making stained glass sheets” and that “it includes hundreds of colours’ in beautiful single color sheets”

Rachel spoke to Sunderland One exclusively about the creation process further, saying: “The type of glass that we used is called Spectrum 96, it’s a fusible glass. Normal glass can’t be mixed, the monastery used innovative techniques at the time so we wanted to use cutting edge technology, using modern techniques. Once we got the designs approved I bought in spectrum stained glass, fusible glass, I then started working with that to create the panels”.

“The mirror layer was one separate layer and then there was another layer of fused glass. I used water jet cutting, it’s a digital process, and it cuts anything abrasively at high pressure with garnet. You’re very limited with the shapes you can do with traditional glass so the use of the water jet meant I could cut different shapes from a number of colored pieces that would be used together on a single layer”

“There are 12 windows, each window had six squares, all in all I had 72 unique panels to make. The mirror layer created the most difficulty; I got an external company to create that for me. It’s took me a year to do this, just over, but it was probably another year when considering the design and authorization processes”

Sunderland City Council worked in collaboration with the local Parish of Saint Peter’s and the Diocesan Advisory Committee of Durham to help realize the fruition of the project. Team Rector of Monkwearmouth Parish, Reverend Dick Bradshaw praised the results, saying: “It has been fantastic to have been involved from start to finish with this visionary artwork reflecting the life and work of Bede”.

“The new stained glass windows are a fantastic addition to the Bakehouse at St Peter’s, where so many visitors come to relax, enjoy their surroundings and learn more about our shared cultural heritage.”

Sunderland City Council’s Cabinet Secretary Councilor Mel Speding, who was present at the unveiling of the new stained glass windows in April, said: “St Peter’s is an important site for our city, our region and for the country so I’m delighted that it continues to capture the imagination of people of this city.”

Reflecting on the project since its completion, Rachel – who is currently doing her PHD at Sunderland University – often visits the café for lunch with friends and colleagues to observe her work. “The church wardens there have said it really enhances the bakehouse and the experience of people visiting” she says, “it’s a different experience for me each time because of the type of glass and changing weather, there’s always an element of surprise. It’s really lovely to see. It’s doing what I hoped it would”

The Bakehouse Café is currently open Monday, Wednesday and Friday between 10.30am and 2.30pm and for best results the windows can be easily viewed from both inside the grounds of the church as well as from inside the café.