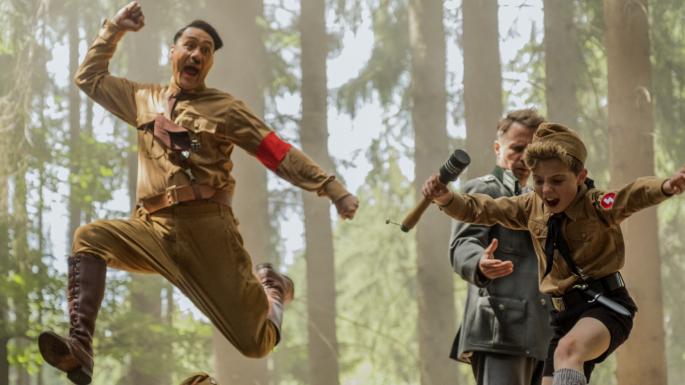 JoJo is an ordinary 10 year old whose fascinated by local culture. His mother working most of the day, JoJo having no siblings and his father absent from the home his mind races with an imaginary friend and “second best friend” Yorkie in their local retreat group.

Of course, this simple routine is rather bizarrely juxtaposed, as JoJo lives in a German suburb of Berlin in the Winter of 1944. A member of the Hitler Youth, his imaginary friend is no one more appropriate (in his fanatical mind) than the Furer himself; Adolf Hitler (played by the film’s director, Taika Waititi). And, naturally, just as a boy grows to be obsessed with Football or Formula One, JoJo’s obsession leads him too pursue a glorious career for the Fatherland.

What’s important to mention about this movie straight away is the not so subtle nature of their surroundings. Seeing the final months of the war as they unfold, the adult characters of the world feel the pressure around them, with JoJo one of the few children left in town after a near accident with a hand grenade means he is wounded – unable to perform more appropriate duties.

Hitler is played with a sort of silliness, though there are moments of genuine fear and discourse with his character; he’s never the real Hitler – he is only Hitler as much as his young German boy believes they are “playing” with their leader. Hitler himself is able to act much like Chris O’ Dowd’s character in Moone Boy…without JoJo he would be irrelevant, and his knowledge of himself is limited to what JoJo knows.

If JoJo was a little bit older, he would easily be drafted to fight for the Fatherland, and in fact it’s only his accident which prevents this from ever happening, as the bitter Colonel (Sam Rockwell) himself excels in his own secret performance, having to continue the pretense of being prevented from participation in this war – yet realizing that defeat is inevitable.

JoJo’s mother (Scarlett Johansson), whose secret fight is for that of the resistance against War, is leaving the house daily to rally against the Nazi Government – but don’t expect a hard hitting drama starring Brad Pitt or Tom Cruise. Instead, the film explains away real world difficulties (such as the lack of young men, the impending war defeat and extreme rations) without ever really discussing it. At times JoJo and his mother clash, he is disrespectful of her behavior and her adoration that the Allies have retaken Italy and defeat is almost certain, but as the audience we don’t hate him for it, because ultimately he’s a child; and doesn’t understand the reality of his situation.

When the film ended and I’d looked back, it was with a sense of realization that the audience – much like the main character – is taken on the same journey as 10 year old JoJo and the world is seen through his eyes. There are many things in the film I’ve missed, things I should have seen, but which are just present in JoJo’s world and taken at rather face value. Parallels to Robert Benigni’s 1998 ‘Life Is Beautiful’ are therefore immediately evident, with the horrors of war dismissed in favor of childish fantasy, in order to protect the individual from suffering more.

For some, the film may hit a little too close to home, as it does look to specifically recreate a time and a place. But what’s different from the vast majority of films based around WW2 is that this movie has little to no combat; it’s not about the fighting or the loss of life or the untold tragedies – rather it’s about one individuals ordinary life in extraordinary circumstances. JoJo is not a bad guy because he’s fanatical about his fuhrer or because Adolf Hitler is his best friend, he’s just a 10 year old boy.

A moving and, at times, truly poetic film. Recommended.